In line with the declaration of Phase 3 of the coronavirus pandemic in Mexico, the Department of Labor and Social Welfare (STPS) will continue to conduct inspections of companies in order to verify their compliance with the provisions issued by the Health Council.

In this sense, the agency will verify that the work centers that conduct non-essential activities remain closed and that those that carry out an activity that is essential for the economy comply with the safety and health measures issued by the federal authorities and based on NOM 030 on this matter.

“We continue following the same Covid-19 Inspection Program, the plan will remain in effect for the duration of the pandemic”, said Alejandro Salafranca, head of the Unit for Dignity in Labor of the STPS, to El Economista. “Inspections are being carried out, exclusively on occupational health and safety matters. Essential and non-essential companies are being inspected”.

The official pointed out that so far, out of the work centers which should be closed that have been visited, 14% remain in operation. Therefore, labor authorities have denounced them to the Department of Health in order for them to be closed down through the Federal Commission for the Protection against Sanitary Risk (Cofepris).

“The majority are complying, and those which have fallen into non-compliance with the regulations are the ones which have been reported to Health”, he stated.

Inspections will continue to focus on the verification of protection and health measures in essential companies and the closure of non-essential work centers, denouncing those that remain open to the health authorities.

The head of the Unit for Dignity in Labor – which is in charge of the inspections – pointed out that the majority of inspections have been carried out thanks to denouncements made by workers and that this mechanism will continue to be instrumental in verifying compliance by the work centers.

Last week Hugo López-Gatell Ramírez, undersecretary of Prevention and the Promotion of Health, warned that companies that refuse to close and stop operations, as requested by the health authority, could be penalized an even closed down.

The official explained that the STPS conducted around 600 inspections in the first two weeks of April, which revealed that there are still companies that perform non-essential activities that have refused to close, among them, companies in the automotive, aerospace industries, activities such as industrial machining, cellulose and paper, tobacco and construction.

Employers must be more aware

Javiera Medina, a partner in Labor Practice at Baker McKenzie, believes that employers must be more aware that, at this time, health is the priority and the inspections carried out by the Department of Labor are a consequence of this, that the companies that do not perform essential activities are closed in order to avoid exposing more people to contagion by coronavirus.

Work centers that perform non-essential activities that remain open are not only failing to comply with the legal framework, but are also putting their workers at further risk.

The specialist said that the closure of the facilities is completely legal, given their failure to comply with health protection measures. Health authorities, she explained, could impose, on one hand, fines of up to 1 million 390,080 pesos under the General Law on Health, and, on the other, fines of up to 434,400 pesos under the Federal Labor Law, which could apply for each affected worker. Both fines are independent of the closing down of the business.

“The truth is that we have not seen the authority imposing these fines, but they could do it, as they have the necessary power. If I have 50 workers in the establishment, they could impose this fine for each one of the workers, since I am actually exposing all of them to the risk of contagion”, explained the Baker McKenzie partner.

In the opinion of Javiera Medina, the absence of fines during the enforcement of extraordinary inspections shows that the authorities are only seeking to prevent contagion and not to establish a punitive policy.

Ricardo Martínez, founding partner of the De la Vega & Martínez Rojas Law Firm, said that the Department of Labor doesn’t have the power to inspect companies that don’t belong to the federal realm and, therefore, asked employers to identify which sector they belong to.

Nevertheless, he acknowledged that if a STPS inspector finds violations of health protection measures, he has the power to close the business down. 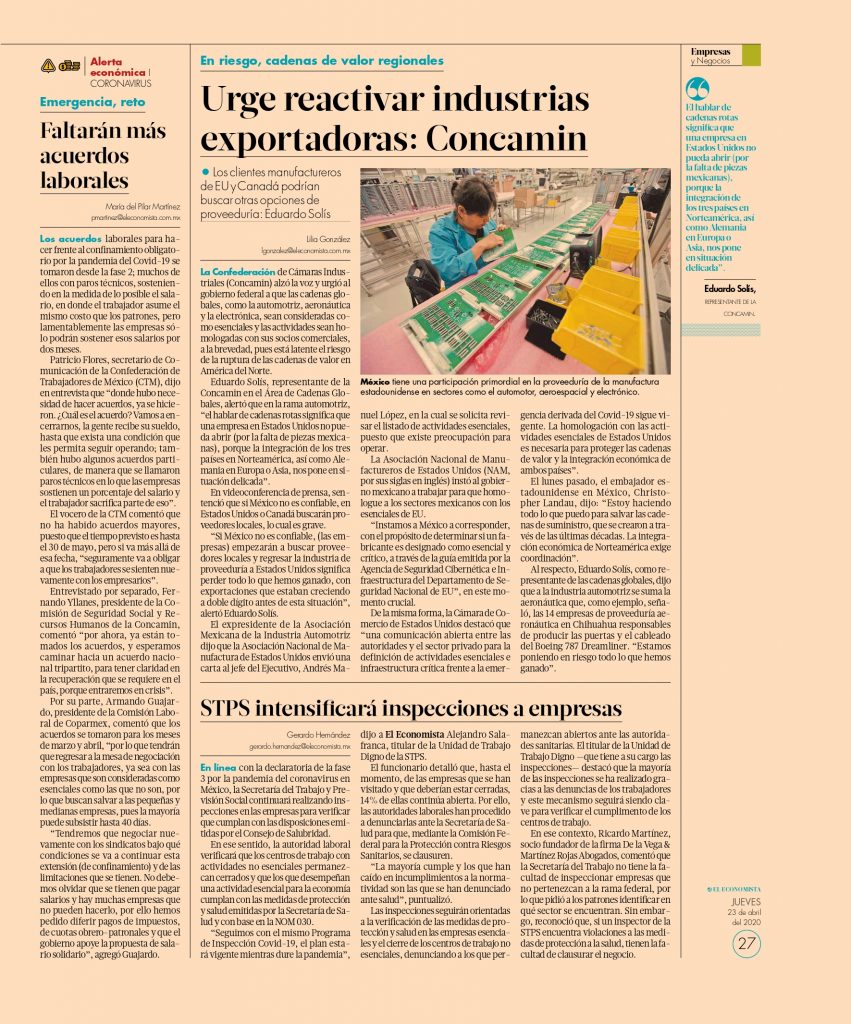 Tags: Covid-19
Previous They seek to regulate salaries in emergencies
Next Amparos are denied to non-essentials
Español