Home Media They seek to regulate salaries in emergencies

The coordinator of the Morena Parliamentary Group, Ricardo Monreal, presented, in the Senate of the Republic, a bill that seeks to amend Articles 427 and 429 of the Federal Labor Law (LFT), in order to guarantee the payment of full wages to workers facing contingencies caused by force majeure.

After the controversy that arose on the actions that companies could take in regard to their labor relations, Senator Monreal raised the possibility of amending the LFT with the objective of avoiding misinterpretations, given that “it is required to create a new concept that was not previously provided for in the Federal Labor Law, which has created uncertainty among workers and employers in all sectors at the national level”.

Article 427, which some employers used in order to terminate labor relationships, “does not fit” into the declaration of health emergency due to force majeure decreed by the General Health Council on March 30 of this year, it does not fit into any of “the instances provided for by Law, which creates the need to make adjustments to the Federal Labor Law with the objective of providing legal certainty in labor matters to all of the country’s workers and employers”.

To that end, the Morena senator proposes adding Section Eight to Article 427, stating that “the suspension of labor or work declared by the competent health authority due to force majeure (…) the employer must pay the worker’s full salary for up to 30 days. In any case, the payment of salaries can be agreed upon by the parties, as long as it is never lower than the minimum wage”.

In regard to the above, labor specialist Oscar de la Vega stated that “apparently the government has admitted that there is a mistake and they intend to add a new section to Article 427, which is specifically tailored for the topic of coronavirus, but is actually nonsense in reality”.

Alfonso Bouzas, coordinator of the Labor Observatory said that “it is a cartoon copy of the 2012 Reform; it will not solve a complicated situation, it will not change the course of what we are living, it is an unfortunate and self-aggrandizing initiative.

Pablo Franco, President of the Mexican Jurists’ Association, said that the initiative does not present a clear objective in the draft proposed for Section Five of Article 429. “It is contradictory, given that it states that full salaries must be paid for up to 30 days in its first part; nevertheless, it immediately opens the possibility of reaching an agreement between the parties, on the condition that the salary is no lower than the minimum wage. It can actually generate more uncertainty”.

Franco added that “this is pointless and even counterproductive, as it is a legislative technique error”.

What does the LFT reform initiative consist of?
• Article 427 remains the same in Sections One through Seven, but the reform adds a new section: Section Eight, which seeks to establish the manner in which health authorities must declare a case of emergency that involves the suspension of activities.
• It adds that the employer must pay the worker’s full salary for a period of up to 30 days.
• It also gives the option for the payment of the salary to be agreed upon by the parties, without the possibility of the salary being lower than the minimum wage. 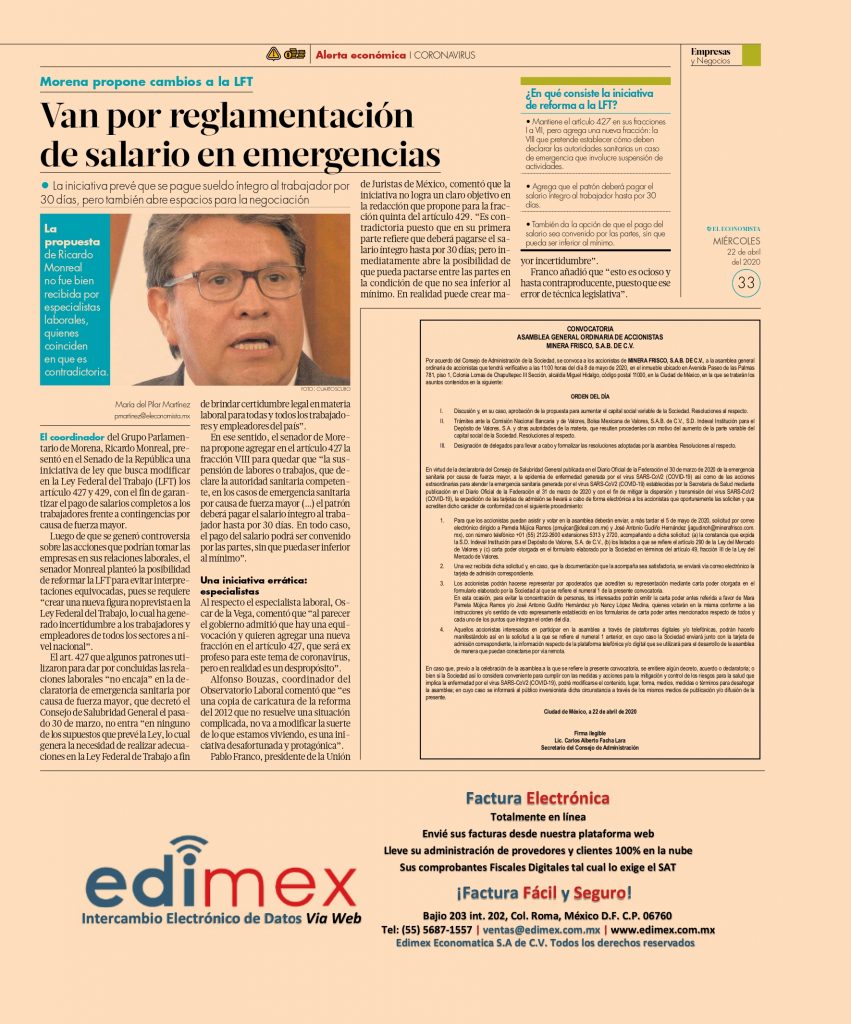 Tags: Covid-19
Previous Upon entry into Phase 3, Morena presents an initiative to safeguard salaries
Next The STPS will intensify inspections of companies during Phase 3 of the health emergency
Español