Home Media Upon entry into Phase 3, Morena presents an initiative to safeguard salaries

Once President Andrés Manuel López Obrador’s government decreed the start of Phase 3 of the Covid-19 epidemic, Morena legislators started preparing an amendment to the Federal Labor Law (LFT), to force companies to pay full salaries for the duration of the pandemic, while governors will define measures to enforce isolation to prevent the spread of coronavirus.

Undersecretary of Prevention and the Promotion of Health, Hugo López-Gatell, assured that the measures to be established by governors and the head of the Mexico City government must be based on “a full respect of constitutional guarantees”, after publishing the four extraordinary measures that will regulate Phase 3.

Upon reaching 857 deaths and nine thousand five hundred and one confirmed cases, the federal Government said that we “have reached a phase of rapid ascent, in which a great number of cases, contagions and hospitalizations will accumulate”.

This situation has caused the Healthy Distance Period to be reinforced at the state or municipal level and the limitation of the mobility of people. “Health authorities (state governments) have other powers that enable them to make decisions in regard to commerce, economy, the government and administration of the state and, based on this, they can make more agile and intensive decisions” in face of the epidemic’s evolution, said the undersecretary.

During the course of the night, the Department of Labor and Social Welfare confirmed to El Sol de México that, so far, there has been no change from “emergency” to “contingency” because no new cause for suspension has been issued and, therefore, the labor situation remains the same.

Labor lawyer Arturo Alcalde agreed, stating that companies cannot make a unilateral decision in regard to salary reductions at this time of emergency and that, in any case, any salary reduction must be negotiated with the worker.

“There is no legal justification for stopping the payment of salaries, the directive is to pay salaries to the extent that this is possible because paying salaries is an investment, it truly is an act of solidarity and an act of solidarity and prudence. But in the event that it is materially impossible for you to fulfill this obligation, then you should then seek to reach an agreement with the workers”, he explained in an interview with this newspaper.

Last Monday, Morena parliamentary leader Ricardo Monreal proposed a reform to amend Article 429 of the LFT to establish that, in the event of a health emergency, the employer must pay the worker’s full salary for up to 30 days.

The legislation currently establishes that the employer will not require the approval of or authorization by a Court and will only have the obligation of paying its workers a compensation equivalent to one day of the general minimum wage in force for each day of suspension, for a period not to exceed one month.”

In regard to these decisions within companies, the Department of Labor and Social Welfare pointed out, upon the launching of its program “Together for Work”, that “now, more than ever, it is necessary to reinforce solidarity and co-responsibility in labor relationships. It must be made clear that there is no legal basis for terminating workers or making unilateral modifications to working conditions”.

He stated that “small companies are the great employers in Mexico and that many companies, regardless of their size, are taking risks, together with their workers and are doing everything possible for safeguarding the sources of employment”.

In this regard, lawyer Óscar de la Vega believes that the initiative presented by Senator Ricardo Monreal expressly acknowledges the lack of legal validity in defending the government’s position.

Section Seven of the abovementioned article establishes the suspension, not the cancellation of collective employment relationships in case of “health contingency” and requires that the employer pays its workers a compensation, not a salary, equivalent to one day of the general minimum wage in force for each day of the suspension and said period cannot last for longer than a month.

In the opinion of the labor lawyer, ever since the emergency was declared on March 31, there has been a mandatory suspension of work, with the exception of essential activities, decreed by the health authority. “Saying that a ‘health contingency’ has not been declared is a formality that does not exist within the Law; the precept is abundantly clear and today we are in the presence of a collective cause for the suspension of labor relations and the employer has that right (to just pay a compensation)”.

Therefore, there can be no salary. “There is no work there is no salary and compensation is paid, as established by law”. 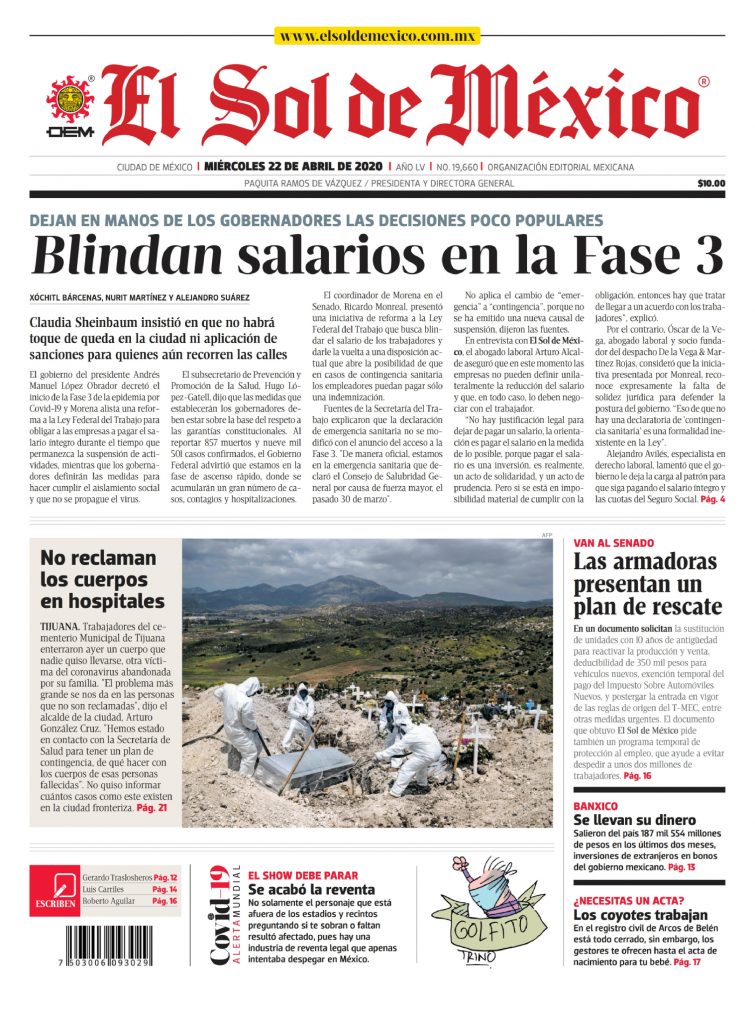 Tags: Covid-19
Previous AMLO bets on rearranging spending in order to obtain fiscal space
Next They seek to regulate salaries in emergencies
Español