Home Media The controversy over the payment of salaries grows

Tension between the Federal Government and the companies grows, as the Covid-19 pandemic progresses.

Yesterday, the Government reiterated the call for companies to keep jobs and pay wages, even if their employees are sent home.

The Employers’ Confederation of the Mexican Republic (Coparmex) warned that it will make an effort to pay its employees’ salaries, according to the capacity of each business, even though the Government has not shown solidarity toward the PI.

Nevertheless, it warned that it has undertaken the task of identifying the legal effects of the Declaration of Health Contingency on labor matters, given that said decree allows the suspension of individual and collective employment relationships in the case of companies, businesses, commercial establishments and all those which are not necessary to face the contingency.

In this regard, labor lawyers debated the health emergency declaration issued by the Government.

In the opinion of the De la Vega & Martínez Rojas Firm, classifying the current situation as a health emergency due to force majeure is a maneuver to circumvent the Federal Labor Law and not declaring a health contingency, which would imply that employers could pay a compensation of one minimum wage per day for a period of 30 days.

Raúl Maillard, president of the Labor Commission of Canacintra [National Chamber of the Transformation Industry], agrees that the Government has sought to prevent the payment of the compensations referred to in Article 427, Section Four, which consist on the minimum wage for a period of one month.

Lawyer Jorge Sales said that the possibility for negotiation between employers and workers is open, the minimum wage is a base, and from there it can go up.

Nevertheless, the undersecretary of health Hugo López-Gatell, reiterated in yesterday’s evening conference that the legal concept of this emergency, caused by force majeure, does not allow, within the current legal framework, the intention of reducing worker’s wages nor it being used for the suspension of the labor relationship, regardless of the size of the company. 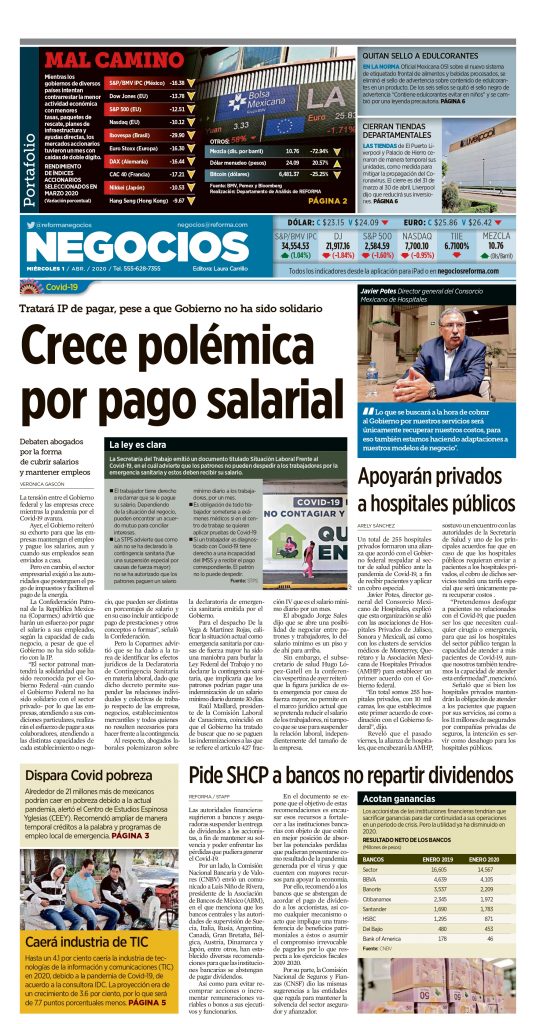 Tags: Covid-19
Previous Deferring the payment of taxes, a global measure
Next Compliance with labor law is necessary in face of the health contingency
Español