Home Media Deferring the payment of taxes, a global measure

The Mexican Government included the collection of taxes among its essential activities in face of the Covid-19 pandemic; April being the month in which natural persons file their yearly income tax returns. This, despite the fact that other countries did not include tax collection among their priority actions.

Rohit Kumar, leader and director of tax policy services at PwC, explained that an example of the above are the measures adopted by the President of the United States, Donald Trump, of postponing the collection of taxes for one month, to help companies maintain liquidity to enable the payment of salaries.

“People need housing and food and, to the extent that they need more of these, they must have funds to cover their cost (…) it is certainly a policy that has been adopted in the United States. Other countries in the world are taking similar approaches and, although I am not familiar with the details of the activity in all other countries, I do know that many nations are taking the same approach as a response to this problem”, said the specialist.

On April 5, President Andrés Manuel López Obrador is expected to announce the measures to be taken to support the country’s economy in face of coronavirus; the private sector requests that he takes this proposal of deferring tax collection into consideration. Will he take it into account?

Violation of the Rule of Law

Once the declaration of health emergency due to Covid-19 has been made public, questions remain as to what the implications of this are for companies and workers.

The De la Vega & Martínez Rojas Firm announced that referring the suspension as being caused by “force majeure” seeks to invalidate Section Seven, which was added to Article 427 of the Federal Labor Law in the 2012 Reform; this section provides for the consequences of the suspension of work as a result of a health contingency.

From that time onward, the law establishes that upon the suspension of work deriving from a contingency “the employer will not require the approval of or authorization by a Court and will have the obligation of paying its workers a compensation equivalent to one day of the general minimum wage in force for each day of suspension, for a period not to exceed one month.” which is why De la Vega & Martínez Rojas – through the voices of Óscar de la Vega and Ricardo Martínez Rojas – pointed out that the Presidential Decree that intends to create the obligation of the payment of salaries without the provision of services has no legal basis and would imply a violation of the Rule of Law.

It is important to note that the abovementioned amendment to the Federal Labor Law was included in order to provide support to both employers and workers in cases of contingency and after the serious economic and social consequences of the aftermath of the AH1N1 influenza epidemic of 2009.

Boeing contributes its grain of sand

We recently reported that Nike, the sports clothing and shoe manufacturer, was preparing to produce designs to support doctors and nurses; now Boeing has announced that it will start using its 3D printing capabilities in various units within the United States to manufacture face shields to help protect those who are in the front lines in combating the virus.

“Our initial production objective is to manufacture thousands of face shields for weeks, followed by subsequent increases in production”, stated the company headed by Dave Calhoun.

The aircraft manufacturer also informed that they have offered the use of their Dreamlifter, one of the largest cargo freighters in the world, to help transport critical and emergency supplies to health care professionals. Good for them.

The opinions expressed herein are the responsibility of the person who signs this opinion column and do not necessarily reflect the editorial position of El Financiero. 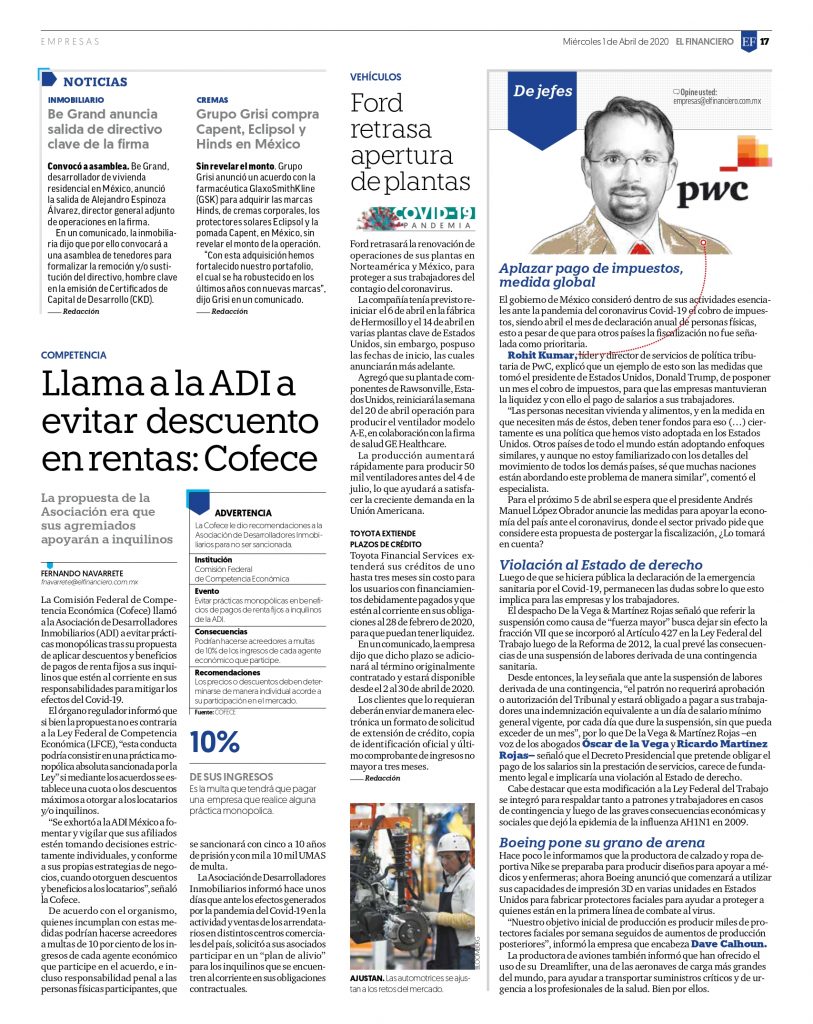 Tags: Covid-19
Previous Individual and contractual agreements to maintain labor relationships in face of the Covid-19 contingency are possible: specialists
Next The controversy over the payment of salaries grows
Español