That is, this ceiling determined on January 24 by the Supreme Court of Justice of the Nation (SCJN) is not, for the time being, a jurisprudence for general application.

Rolando Talamantes, advisor in pension matters, agrees that the resolution reached by the SCJN will only apply to workers who, in disagreement in regard to their pension, file claims against the IMSS.

He clarified that it does not apply to workers who are processing their pension and even to those who have received high pensions.

“It applies to decisions issued by the courts, Conciliation and Arbitration Boards, because a defined criterion is already in place, it is jurisprudence, the Court dictates that these matters must be resolved in this manner. (Nevertheless) the criterion to be issued by the Technical Council of the Mexican Social Security Institute [IMSS] is very important.

“The IMSS will have to make the decision in the case of people who are about to retire”, underlined Óscar de la Vega, a lawyer at the De la Vega & Martínez Rojas Firm.

Ricardo Martínez, an expert on labor matters, agreed that the Technical Council of the IMSS is the one who must dictate the ruling.

“There are two possibilities here: that the Technical Council first dictates a ruling stating that from now on all pensions granted under the 73 Law are limited to 10 minimum wages, and it will then apply to all people who have retired or, otherwise, the Federal Government can say that, as of tomorrow, based on the Court’s ruling, it will reduce the 25 minimum wage pensions of those who have retired under that regime”.

“If the IMSS and the Federal Government so decide, they will apply (the jurisprudence) to everyone”, he stressed.

Other specialists ruled out the possibility of the IMSS making the jurisprudence a general one, but they believe that it will apply in the event that there is litigation involved.

Pedro Sánchez, president of the Commission of Social Security and Pensions of the CCE [Business Coordinating Council), explained that the jurisprudence is not binding, it derived from a contradiction of theses corresponding to a particular case.

He stated that the criterion mentioned by the SCJN arose from the case of a person who requested a revision.

Sánchez recalled that the IMSS did not implement jurisprudences issued in previous years and that they expect that the same position will be announced.

Note taken up by the following media. 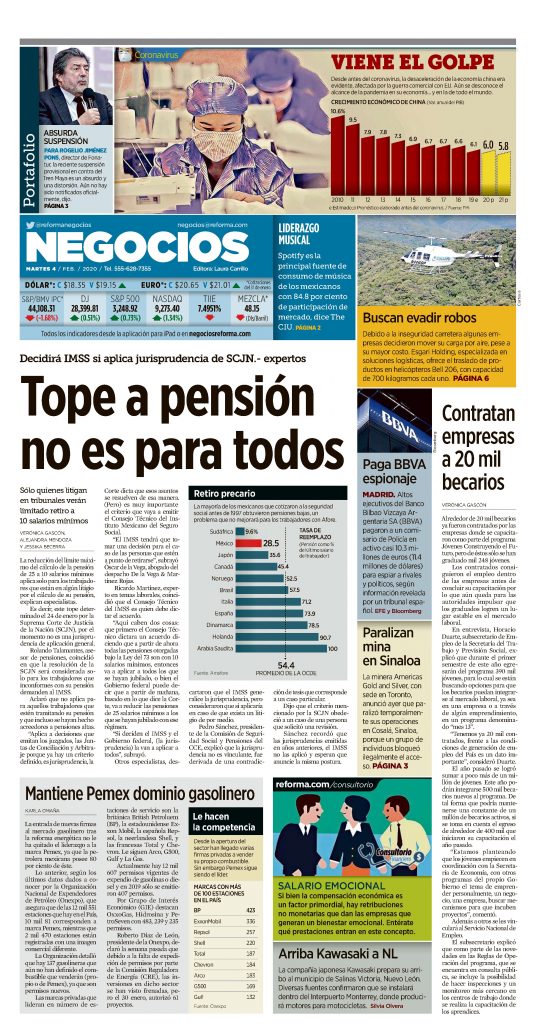