There is concern among businessmen and workers’ leaders in the country due to the constant “interference” of US union bodies in the legitimation process of collective bargaining agreements. 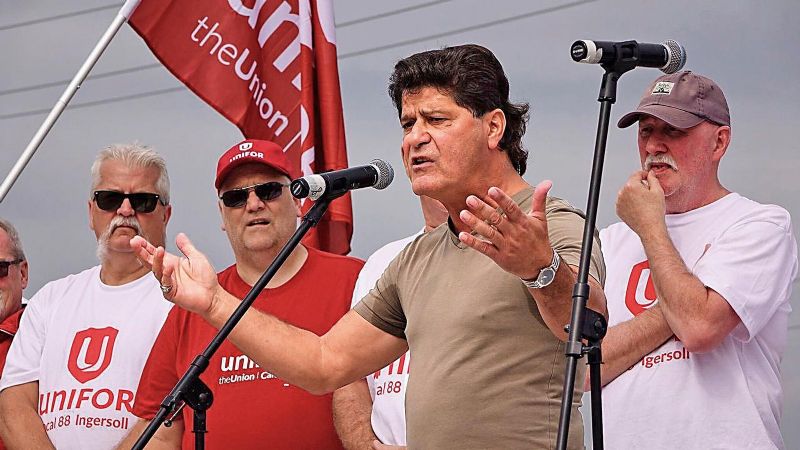 There is concern among businessmen and workers’ leaders in the country due to the constant “interference” of US union bodies in the legitimation process of collective bargaining agreements in the context of the United States, Mexico, Canada Agreement (USMCA).

In an interview with Proceso, Ricardo Martínez Rojas, litigator, founding partner of the De la Vega & Martínez Rojas Law Firm and vice president of Social Security of the Confederation of Industrial Chambers (Concamin) states: “We have investigated, and we have learned that, in the case of General Motors, there was clear intervention by American unions. This is not right, and the USMCA itself does not establish that agents of American unions or NGOs are to come and talk to the workers, create unrest among them and interfere in the decision of which unions they should vote or not vote for.”

The leader of the Concamin, José Abugaber Andonie, had already issued a warning. In his participation in the inauguration of the ILO offices in Mexico, the businessman warned: “The active interference of some United States union bodies is worrying; fortunately, the Department of Labor and Social Welfare and the Department of Economy have given timely follow-up to these complaints.”

This is not the only business organization that has remarked on the topic of there being “interference”.

“There are labor unions that have talked to us about their concern on there being interference by US Unions, particularly in the automotive industry and, of course, in the companies of these sectors. It is important to note that we cannot get involved in the legitimation process of agreements, we can just simply facilitate it. But we have also told the authorities that they need to verify that these instances of interference do not actually exist”, José Medina Mora, president of the Employers’ Confederation of the Mexican Republic told Proceso.

The project of the ILAB

The United States has been emphatic on the implementation of the labor reform in Mexico, to “eradicate the vices” incurred in by large worker’s unions in the country in the last few decades.

To this end, the American Union, through the International Labor Affairs Bureau (ILAB) of the Department of Labor launched a project to provide assistance to the USMCA called “Strengthening of the capability of the workers for the exercise of their labor rights in Mexico.”

With an investment of 10 million dollars, they financed the American Center  for International Labor Solidarity and, as implementing partners of the project we find the Federation of Independent Unions of the Automotive, Auto parts, Aerospace and Pneumatic industries , the Miners and the Solidarity Network of Workers at Risk.

The project, which has a term from December 2020 to June 2025, “will offer workers and their organizations expert technical assistance, the continuous development of skills and pro bono legal and advisory services”, said the ILAB.

Additionally, it adds, the project will create spaces for the analysis, exchange, reflection and development of recommendations for the improvement of the implementation of the labor law reform.

That bureau warns that there are “significant” obstacles that prevent a successful progress of the labor reform in Mexico.

It further explains: “There are limited alternatives to protection unions, a minimal public awareness of the new rights and responsibilities of the parties involved in labor under the reform and there is an extreme imbalance of power between the dominating protection unions and the weaker novice democratic labor movement.”

And that isn’t all, it notes that Mexico’s independent labor movement largely lacks the reach and influence to create a narrative contrary to workers’ rights and, therefore, workers who are not involved or are not close to active organization campaigns are largely unaware of the changes.

For Tereso Medina, deputy general secretary of the CTM [Mexican Workers Central], it is about “interference” by the United States.

“We are aware of the interest of the United States in this topic of the legitimation of collective bargaining agreements, but it has also shown interference in union life in Mexico and has supported, like never before in history, projects that have the objective of raising awareness, in quote marks, to provide guidance to workers in regard to knowledge of the labor reform and its implementation”, he states in an interview with this weekly publication.

“A very clear example is the issue of General Motors, in Silao. Jerry Dias gave a press conference, offered the workers the payment of 16 dollars an hour to each worker in the automotive industry… The workers believed him, and they also believed in that project, and what happened now is that there was no such payment nor the fulfillment of those promises”, reproached the also PRI congressman.

In that press conference, Dias, leader of Unifor National, the largest Canadian union, clarified that “we have been present since the USMCA negotiations to ensure that the CTM stopped exploiting the workers, as it has been doing … In order to put an end to the old non-democratic ways of the old unions in this country, it is best to do it from the international arena”, he said.

The position of the STPS

For the STPS [Department of Labor and Social Welfare] there is no such interference since Mexican unions maintain relationships with international trade union centers that “only conduct dissemination and orientation programs” for Mexican workers.

“So far, we have not detected any interference. Interference would be for them to have an influence in the consultation procedures, in voting processes, that they were there,  trying to coerce workers or inducing them to vote for another option”, Alfredo Domínguez Marrufo, general director of the Federal Center for Labor Conciliation and Registration (CFCRL) of the STPS, tells this weekly publication.

In a telephone interview, he further explains: “We understand that there has been activism, because many of the workers of these independent unions sometimes find support on the guidance and advice offered by these union and international organizations that are normally doing outreach work, they are conducting this task of providing guidance to workers.

The official concludes that “we will step in at any time that we become aware of this situation.” But, at this time, we understand that with economies as linked to one another as those of Mexico and the United States, the existence of these activists and their belonging to independent unions is natural.

For Martínez Rojas, however, it is time for the authorities to reprehend this: “Legally, American unions cannot act in  Mexican territory, they do not have the legal capacity and it seems wrong to us that operations are conducted, albeit in a veiled manner. They get involved and they even make publications in social media on who to vote for or who to go against in the Mexican union centrals”, he explains.

And he concludes: “I do believe that this would be the responsibility of the CFCRL and of the Department of Labor, to avoid foreign American unions to interfere in Mexico. There has to be a strong petition by Mexico in this regard.”