FROM JANUARY to this date, at least 600 new union organizations have requested their registration, stated union leader Tereso Medina yesterday. Should the document attesting to their registration be granted, “we hope that they start working within a sphere of union freedom. That it does not become libertinism”, he stated. The Labor Reform came into effect four months ago, recalled the leader of the Confederation of Mexican Workers (CTM) in Coahuila. And ever since, we have been “defining the strategy” for implementing this reform. He acknowledged that the workers, union leaders, businessmen and lawyers “are interested in providing Mexico with a responsible equation.”

Medina participated in a panel on the Labor Reform. Also present were Alex Olhovich, Human Resources Vice-president of Grupo Televisa, and Ricardo Martínez, founding partner of De la Vega & Martínez Rojas. The dialogue took place within the framework of the Annual Congress of the Mexican Association for Human Resources (Amedirh).

The ex-senator warned that the amendments to the Federal Labor Law, which seek to democratize unions, will bury protection collective agreements. That is, those which favored companies and union leaders, not employees. Those types of pacts “that were born surrounded by silence, will leave surrounded by silence”, he said.

For Tereso Medina, the transition from a labor model that had prevailed for over 100 years “brings up doubts”. In the case of the workers: which leader will represent them or which union they want for the signature of their collective bargaining agreement. For unions and companies, how to implement the new rules without “disrupting growth or decelerating investment.”

Tereso Medina outlined five points to transition into the new work environment: First: avoiding polarization between unions and companies. The second one is the need for union organizations to be transparent in regard to their economic resources.

The third front is the legal one. Law Firms will play “a strategic role” in explaining the new course to unions, workers and companies. The fourth is the social arena; unions will need to be the interlocutors of workers with companies and government. The fifth, the education in this new culture.

And the Human Resources Areas are best suited to implement this last point, he stated.

Alex Olhovich, Human Resources Vice-president of Grupo Televisa agreed with Medina. The most important thing right now, he stated, is “looking after the work environment”. Televisa has over 45,000 collaborators, 50% of which belong to a union. Improving and maintaining a good working environment is achieved through training in all areas, he stated.

Note published in El Economista, in the Companies and Business section by the Editorial Department 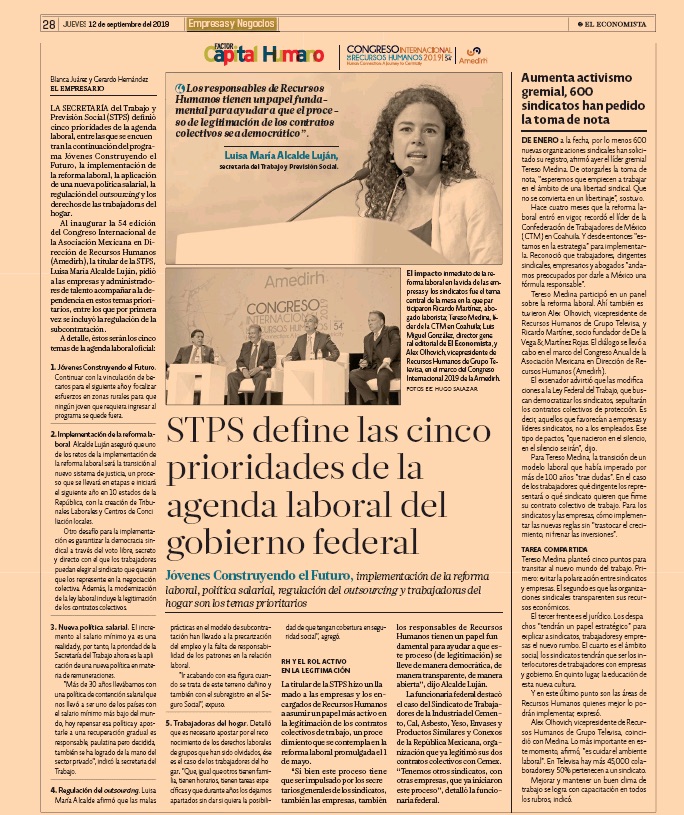 Tags: Trade unions
Previous The STPS defines labor agenda priorities
Next What do you have to evaluate in regard to your workers (NOM 035)?
Español