Home Media The reform on outsourcing clears an obstacle

The private sector, unions and the federal government agreed to cap profits at three months of the worker’s salary, thus ‘unjamming’ the reform on outsourcing

A little over three months after the worker-employer commitment made before President Andrés Manuel López Obrador to reach a consensus on Employee Participation in Company Profits (PTU), the private sector, the unions and the federal government agreed to cap Profits at three months of the worker’s salary, thus ‘unjamming’ the reform on outsourcing.

The Department of Labor and Social Welfare (STPS) and the employers’ and workers’ representatives agreed to add Section VIII to Article 127 of the Federal Labor Law (LFT), setting a cap on the PTU, a proposal that will be taken this week to Palacio Nacional [the seat of the Executive Power], with the objective of giving a “green light” to the discussion of the reform on subcontracting matters in Congress.

“The amount of participation in profits will have a maximum limit of three months of the worker’s salary or the average of the participation received in the last three years; the amount that is most favorable to the worker will apply”, the reform establishes.

The STPS and the unions refused the businessmen’s’ approach to cap the PTU at one month of the worker’s salary.

The agreement was reached this las Friday at a virtual meeting presided by the head of the STPS, Luisa María Alcalde, and attended by Antonio del Valle, president of the Mexican Business Council; José Manuel López Campos, president of Concanaco-Servytur [Confederation of National Chambers of Commerce, Services and Tourism]; and Carlos Salazar, president of the Business Coordinating Council (CCE) representing the business sector. 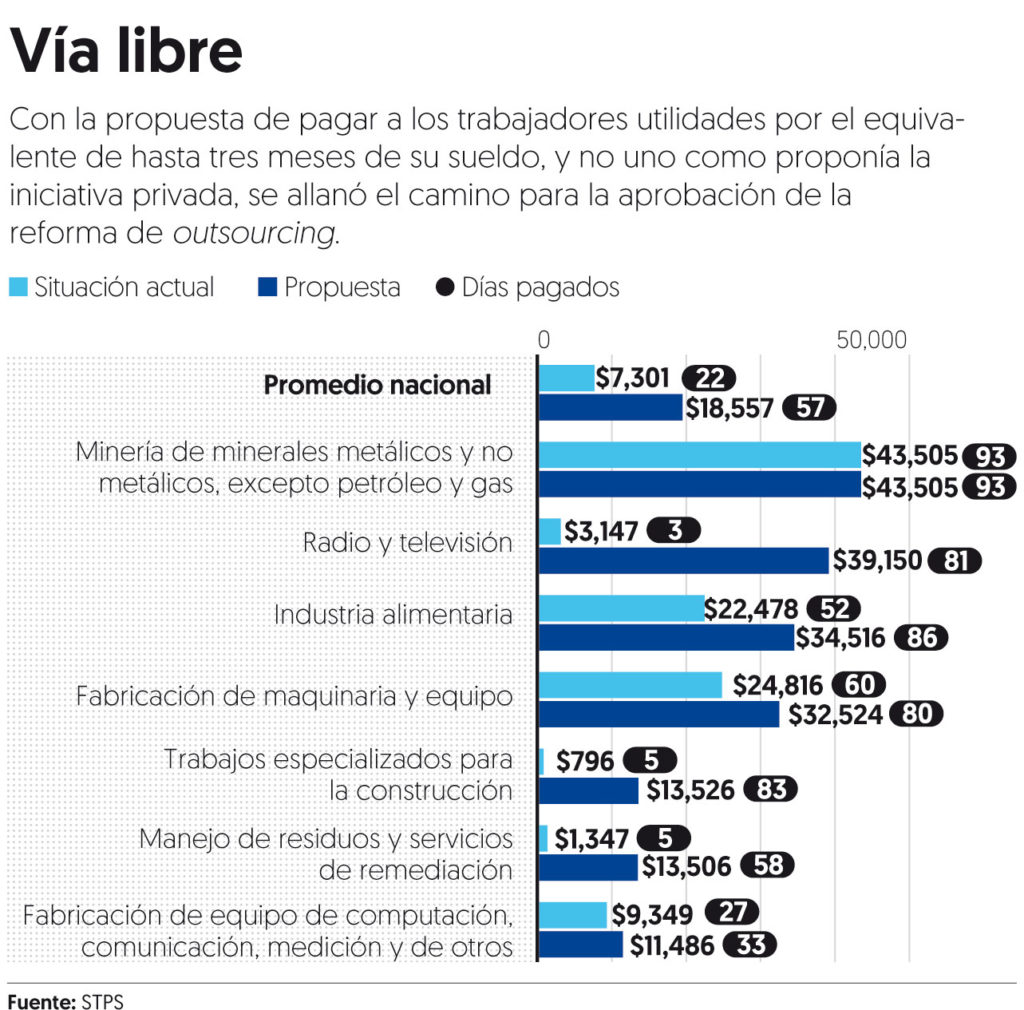 Profits in the sectors

For the STPS, this agreement makes workers’ rights to the PTU “untouchable”, this in accordance with the percentage determined by the National Commission for Employee Participation in Company Profits on September 9, 2020, which places it at ten percent.

“The proposal seeks to benefit all paid workers and it seeks that companies hire directly without employing the mode of personnel subcontracting”, said Alcalde.

STPS estimates presented at the meeting project that, with the proposal, workers will receive, on average, an PTU of 57 days of salary or 18 thousand 557 pesos, that is, 2.59 times, or 154 percent more than what they currently receive, which is 22 days of payment, with an average amount of 7 thousand 301 pesos.

“This will allow the progress of the reform on subcontracting sent by the Executive Power. We have to go to the President to tell him ‘this is the agreement’ and it will be finalized there. We were told that it could possibly happen this week, we do not know the date yet, but what we discussed on Friday will be confirmed there”, maintained Isaías González, leader of the Revolutionary Confederation of Workers and Peasants (CROC).

For his part, Rodolfo González, leader of the Regional Confederation of Mexican Workers (CROM), pointed out that “the agreement has the objective of safeguarding the rights of workers, particularly the workers of the mining industries, who are the ones who have had more than three months of this benefit … In the meeting, the business sector agreed, and we were able to make progress in this sense, there was a consensus.”

Ricardo Martínez Rojas, founding partner of the De La Vega & Martínez Rojas Firm, said that “the government had offered those three months, but this is too much because it is 20 percent of the annual salary of the worker, no company will be able to pay this, they are out of focus, and then, with the pandemic and unemployment, well, this is not the time to raise costs.”

The private sector keeps other issues relating to the prohibition of subcontracting on the table for negotiation with the STPS, such as the date of entry into force, the temporary nature of subcontracting personnel in the agricultural and sugar cane sectors and a clear definition of “main activity”.