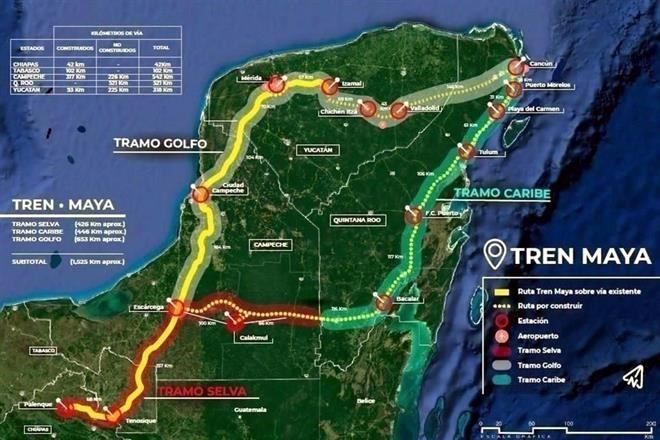 Experts pointed out that the fact that the unions hold several collective bargaining agreements for the construction of the Mayan Train could lead to international complaints for the violation of the principle of union freedom expressed in the new Treaty between Mexico, the United States and Canada (USMCA).

“At some point somebody could present this matter before international bodies as a breach by the Government itself”, pointed out lawyer Pablo Franco.

To date, four stretches of the mega-project have been bid on; these stretches have been distributed among the unions. This would mean that, in order to get a job in the works, it is necessary to join one of these unions, as these organizations give their members preferential treatment.

“Now, what should happen in the new scenario is that the company should hire whomever it chooses to hire, and the workers would then decide whether they want to unionize or whether they are part of a union and, in the event that the necessary representativity is achieved, they request to sign a collective bargaining agreement with the company”, he explained.

“If the government had a clear policy it would have to require the companies themselves to abide by the law and respect union freedom”.

For his part, labor litigant Ricardo Martínez agreed that the way in which collective bargaining agreements are being signed in an emblematic work such as the Mayan Train goes against the commitments made by Mexico.

“This is in violation of the right of association and effective collective bargaining, it goes against the Constitutional Reform, the Federal Labor Law, the USMCA and Convention 98 of the International Labor Organization (ILO). Collective Bargaining Agreements cannot be allocated, workers must choose their union”, he emphasized.