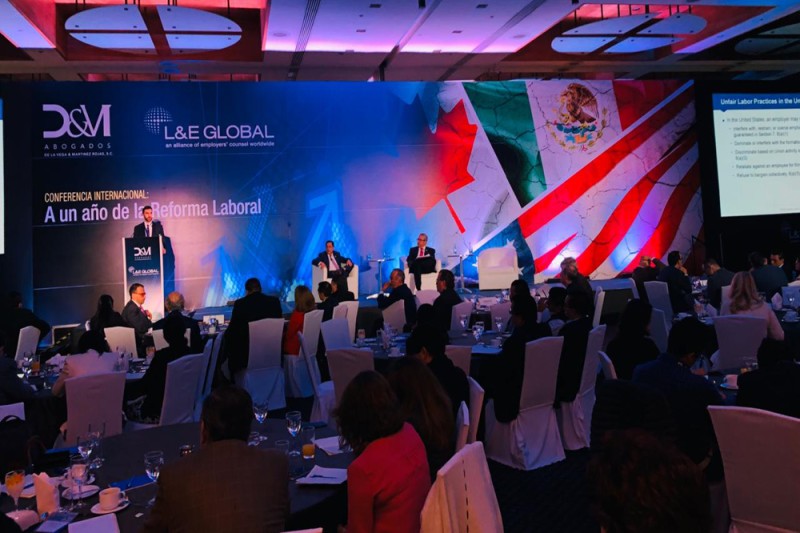 There is a debate on collective agreements and their implementation in companies
There are three years to go before the Federal Conciliation Center and the Federal Courts are in operation, in addition to having completed the extraordinary revision of Collective Bargaining Agreements.

Since the objective of the new Federal Labor Law passed last year is to end with protection agreements, employers have the obligation of conducting an extraordinary review in order not [sic.] to terminate them, and this review must be conducted, at least once, within the next four years.

During the inauguration of the second congress on labor matters, “One Year after the Labor Reform”, organized by the D&M Law Firm, Oscar De la Vega, partner at D&M Abogados, pointed out that the projection of the Labor Reform will be completed on May 1, 2023.

Government information indicates that at least 80% of collective bargaining agreements are approved by the unions without holding meetings and they are very far from allowing their workers to understand the company’s situation and to have leverage in the negotiation of benefits.

“This is the most important and transcendental reform in Mexico since 1917. Many lawyers will not like it, because protection agreements will be eliminated in three years”, said Ricardo Martínez Rojas, partner at the Law Firm.

Based on Annex 23-A of the USMCA, the reform of the LFT [Federal Labor Law] met the demands of the United States and Canada to guarantee freedom of association, free collective hiring and independent labor justice.

The reform is based on systems for the election of union leaderships through voting; thus, unions will now be required to obtain what is known as “proof of representativeness” in order to demonstrate that they have the support of at least 30% of the workers in the company.

Tags: Collective bargaining agreement Ricardo Martínez Rojas Unions USMCA
Previous The importance of union registration / IDC On line
Next Negotiations under the cover of darkness are over; for the first time, the workers will be in command / El Economista
Español