Mexico has run out of time for discussing, in a timely manner, a reform of the pension system that would permit the reduction of the fiscal costs represented by the payment of workers’ pensions, which will affect public finances in the short term, warned experts consulted by 24 HORAS [24 HOURS].

Víctor Ramírez Fuentes, ex-president of the National Commission of the Retirement Savings System (Consar), pointed out that a deeper discussion on the topic of pensions in Mexico needs to be conducted, given that the reaction by the authorities to the alleged capping of minimum wages was too hasty and revealed the political sensitivity in regard to this topic.

Additionally, he believes that the government lost the opportunity to discuss a reform to the pension system that would have reduced the fiscal costs paid for compensations of 25 minimum wages.

He said that the controversy that arose should lead to an internal discussion within the Mexican Social Security Institute (IMSS), in order to assess the implication of paying pensions of 25 minimum wages.

“Paying 25 minimum wage pensions costs the country a highly significant amount of resources; these pensions are very generous, highly subsidized and did not have corresponding inflows, that is, the saver did not contribute enough to earn a pension of that magnitude”, he stated.

According to the Center of Studies on Public Finance (CEFP) of the House of Representatives, it is calculated that, by 2035, pension related obligations to that year will come to 1.2 trillion pesos. Additionally, according to the Center for Economic and Budgetary Research (CIEP), pension spending has increased 35.5% since 2014, with an average annual rate of 5.2%.

Furthermore, it makes the projection that the expenditure in distribution pensions would increase to 5.8% of the GDP in 2030, equivalent to 3.3% of the GDP in relation to the Expenditures Project of the Federation, 2020, without taking into account the expense on individual accounts and non-contributory pensions.

In the opinion of Ramírez Fuentes, the resources used for the payment of pensions could be used for education, infrastructure, safety, among other areas. In parallel, he believes that there is no equality between the benefits that pensioned workers can receive under the 1973 and the 1997 regimes, due to the total amount of pensions, contribution weeks and other factors.

Ricardo Martínez, labor lawyer and founding partner of the De la Vega & Martínez Rojas Firm, clarified that the worker’s pensions will not be put at risk. However, he recommended that people can go to the affiliation offices at the IMSS [Mexican Social Security Institute] to find out how their pension is calculated. In the event of any error or disagreement, they can file a complaint with the Institute.

“The highest debt the State has is in the matter of pensions; in the long term, it could affect the welfare of the population. The ruling by the Supreme Court of Justice of the Nation (SCJN) was legally correct, although it can be labeled as being unfair”, he stated. 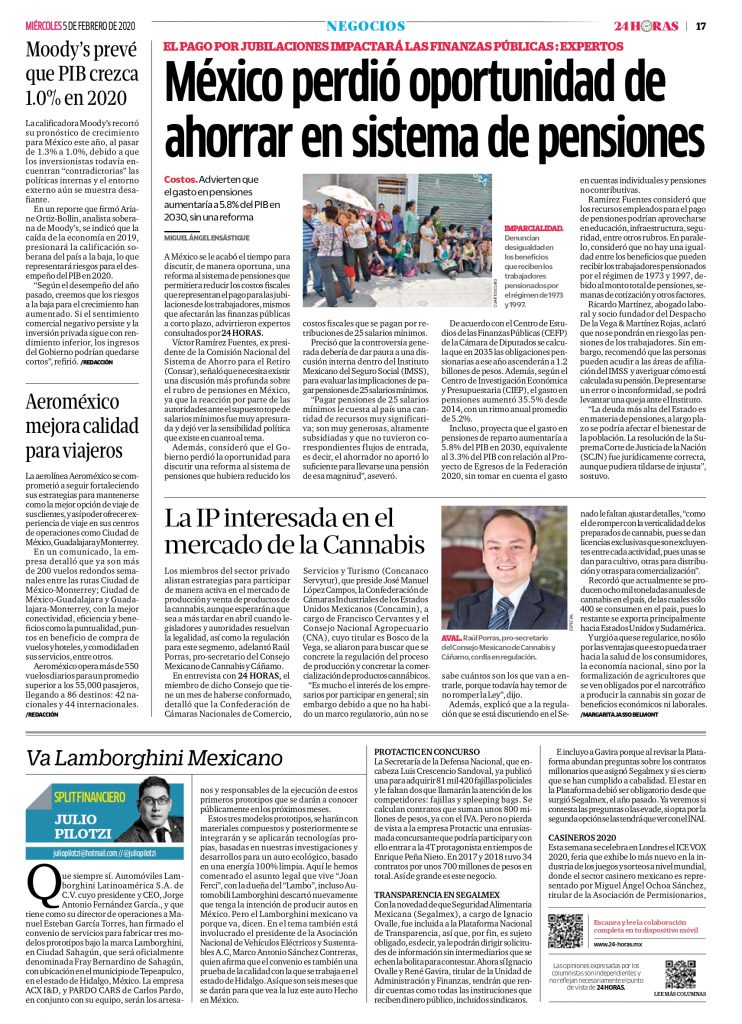 Tags: pension payment
Previous There will be serious problems with pensioners and retirees in 2026: Specialist
Next Capping of pensions
Español