Washington DC, United States (December 11, 2019).- The United States will be able to conduct surveillance activities in Mexico on compliance with the Mexican Labor Law and request a panel of experts when Mexican union democracy is violated, according with the amending protocol to ratify the United States–Mexico–Canada Agreement (USMCA), signed yesterday at Palacio Nacional [Seat of the Federal Executive Power].

Labor inspectors were not included in the new trade agreement, as the Donald Trump government had requested, but a new figure was established: “Labor Attachés”, envoys into Mexico to provide information, from the site itself, on the labor practices of the Country.

The expert panels will be formed upon accusation that union democracy is not being complied with, explained Eugenio Salinas, president of the Commission on Foreign Relations of the Concamin [Confederation of Industrial Chambers of the United Mexican States] and member of the Private Sector’s Cuarto de Junto [Room Next Door].

Jesús Seade, undersecretary for North America of the Ministry of Foreign Affairs, explained that it will apply, for example, in the election of union leaders, acceptance of a collective bargaining agreement or its revision, but not on other topics such as discrimination or child labor.

An analysis conducted by the De la Vega & Martínez Rojas Law Firm pointed out that these changes are transcendent for companies, as they will have to pay attention to the due compliance with the labor reform, under the risk of being prevented from exporting to the US.

The new labor surveillance, as well as stricter rules in regard to materials for the automotive sector and environmental surveillance are a central part of the document that was signed by representatives of the three countries in the presence of President Andrés Manuel López Obrador.

During the ceremony, Chancellor Marcelo Ebrard stated that the signature was achieved against all odds, he considered this signature as a “mission accomplished”.

The US trade representative, Robert Lighthizer, stressed that despite the fact that the 2018 presidential elections came in the middle of the negotiations, Mexico did not mix politics with the trade agreement.

The Deputy Prime Minister of Canada, Chrystia Freeland, pointed out that the modernization of the Treaty is fundamental for the three countries.

In the US, Nancy Pelosi, president of the lower house and prime mover of the labor amendments, celebrated the changes.

Should the USMCA be ratified in the Congresses of the three countries, the agreement will be valid for a term of 16 years and the conditions will be reviewed in 6 years and a decision will be made on whether to extend it for another 16 years.

Note published in Reforma, Business Section by the Editorial Department 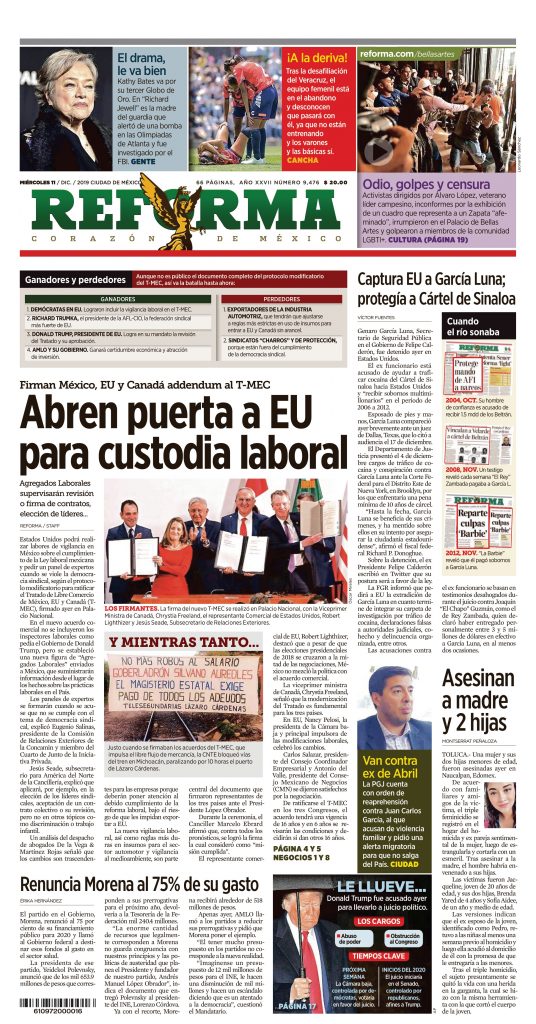 Tags: Labor inspections T-MEC union democracy
Previous Benefits of the pilot program Incorporation of People who are Domestic Workers
Next Additional conventions to the USMCA Free Trade Agreement announced by the Chairman of the Committee on Ways and Means of the House of Representatives of the United States, Richard E. Neal.
Español