Mexico City (November 04, 2019) .- The private sector warned that initiatives and reforms that undermine job creation and investment are being presented in regard to labor matters.

Two of them were presented by Senator Napoleón Gómez Urrutia, president of the Commission on Labor of the high Chamber: one is to double accrued salaries in the event of labor proceedings from one to two years and the other is to attack illegal outsourcing.

Additionally, there is also the reform included in the Federal Labor Law that places the responsibility of presenting proof in the event of unjustified dismissal on the employer.

“The initiative of doubling accrued salaries from 12 to 24 months when proceedings last for more than 24 months is a formula that will inhibit the creation of jobs and will cause informal employments to grow; this because, who will dare to hire formal employees under this high risk of entering into labor proceedings?”, stated Lorenzo Roel, president of the Commission on Labor of Coparmex [Employers’ Confederation of the Mexican Republic].

In his opinion, doubling the amount of accrued salaries will complicate conciliation between workers and employers in labor proceedings, given the incentive to prolong these processes.

In addition to this, we have the reform to Article 784 of the Federal Labor Law, which places the burden of proof of the termination on the employer.

The initiative to combat illegal outsourcing has also met with the disapproval of the private sector, as it criminalizes subcontracting.

“On this topic, it is aggressive to qualify the use of this mode as a crime by definition; it is something that should not be included in an initiative that, in addition, is not an initiative that was discussed with the sectors.

“Although it was one of the topics covered in the open Parliament, the conclusions were that it should be attacked in accordance with the current legislation, going against those who abuse this mode”.

Attorney Ricardo Martínez, of the De la Vega & Martínez Rojas Firm, agreed that the initiative to regulate illegal outsourcing is a mistake and goes against employment and investment.

In contrast, Gómez Urrutia argued that, through the regulation of outsourcing, they seek to prevent the violation of the labor and social rights of the workers as well as to prevent companies from evading taxes and the payment of profit-sharing.

Note published in Reforma, in the Business section by Verónica Gascón 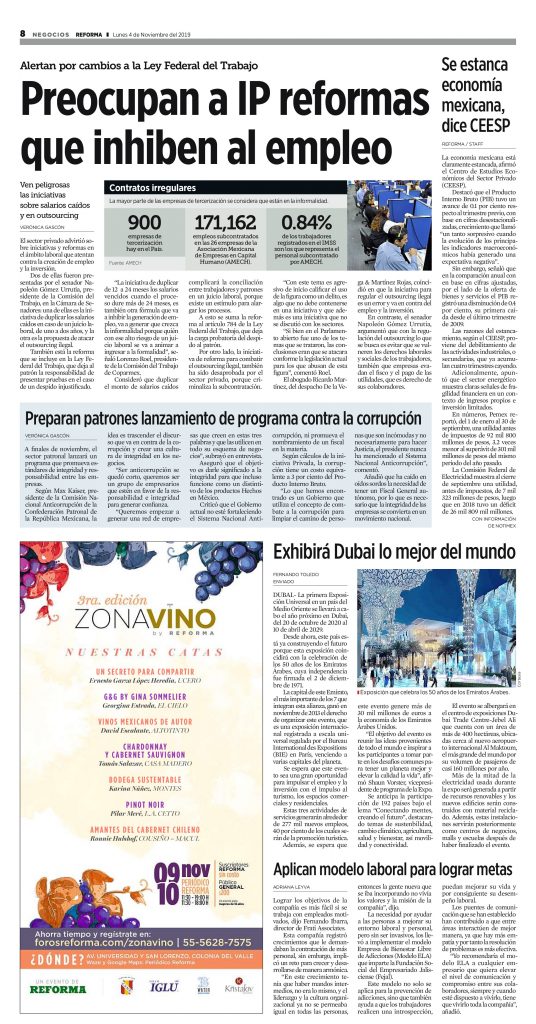